Dr. David Vanderpool ’78 has been named the inaugural recipient of the  Lee S. Smith ’65 Courage and Honor Award. Dr. Vanderpool, MD is the CEO and founder of LiveBeyond, an international humanitarian organization providing healthcare, nutrition and education to communities in need.

To learn more about the award and Dr. Vanderpool’s inspiring and life-altering acts of service, we invite you to watch the video above.

Please join us in hearing from Dr. Vanderpool on April 21, 2023, as he addresses students, faculty and alumni at a special Upper School assembly at 1 p.m. We will formally recognize and celebrate him at the Spring Alumni Dinner later that evening.

The Lee S. Smith ’65 Courage & Honor Award recognizes an alumnus of the St. Mark’s community who demonstrates courage, honor, perseverance and justice, in the communities to which they belong by using his voice and actions to affect measurable change to elevate humanity. 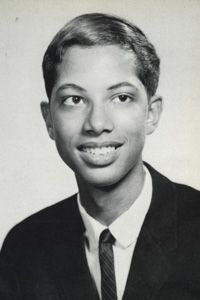 When Lee Smith '65 applied to St. Mark's in 1964, he was a top academic student at James Madison High School with a long list of accomplishments: president of the National Honor Society; student body vice-president; a member of the Reserve Officer Training Corps and the drill team; an Eagle Scout and a recipient of science awards from NASA and the U.S. Air Force for his research on fuel cells. Still, his acceptance to St. Mark's required a Board meeting.

Then-president of the Board of Trustees Ralph B. Rogers said in the boardroom, "I never accepted the chairmanship of this Board of Trustees with the notion that it was to remain a segregated institution." The meeting ended with the agreement to desegregate St. Mark's. Smith began his senior year in the fall of 1964 as the School's first Black student.

After graduating in 1965, Smith joined four other Marksmen at Harvard the next year as one of approximately 30 Black Harvard students in the graduating class of 1969. Earning his law degree from the University of Washington in 1974, Smith has led a successful life practicing law, having held multiple notable titles, including associate vice president for Legal Affairs at the University of Texas at Austin, counsel to the director of the Washington State Department of Wildlife and chief regional civil rights attorney for the United States Department of Health and Human Services.

"What a brave and courageous young man Lee was, coming here at that time and forging a new path for the future, for our school and community," said Eugene McDermott Headmaster David Dini. "By naming the new Alumni Award in his honor, Smith's contributions will be forever preserved in St. Mark's history."